This is Episode 45 of Dice, Camera, Action. 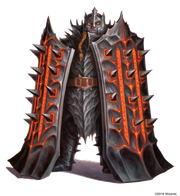 When we last saw the waffle crew, Paultin was off on his own and got knocked out by an iron golem commanded by a dao (earth genie). The rest of the group rescued a dwarf prisoner, but ended up getting cornered by the fire giants.

Near the end of last episode, Strix drank a potion of frost giant strength. At the start of this session, she knocks the fire giant, Duke Zalto, over.

Elsewhere in Ironslag, Paultin wakes up. The dao apologizes for knocking him out, and he notes that fire giants are trying to get into the room. The golem is blocking the door, keeping them out.

The dao snaps his fingers, and Evelyn's armor of invincibility appears on Paultin. It is eventually determined that because Paultin isn’t attuned to it, he doesn’t get the benefits of it.

Paultin creates a waffle hut (leomund's tiny hut) so that he and the golem are inside of it, blocking out the dao. and casts thunderwave inside the golem. The golem responds by emitting a poison gas that knocks Paultin out.

The Duke drops Strix and the dwarf in the same round. Strix is unconscious. The rest of the group is invisible. The giants throw flour everywhere, which covers them and makes the heroes visible.

Looking For Their Pets[edit | edit source]

Diath tries to use diplomacy on the giants. He rolls an 8. He eventually tells the giants that they are here to their lost pets. The Duke thinks that's the stupidest thing he’s ever heard.

Suddenly, there's a massive crash. That's the pets from last session causing the vonindod to collapse.[1]

The Duke suspects that the heroes are just a distraction to cover for some bigger scheme. The Duke puts Diath in the cage in his maul. Strix awakens and rises to her feet. Brimskarda immediately strikes Strix with a massive cauldon, knocking her out once more.

Diath, in the cage, begins to panic.

The dao magically shrinks Paultin and puts him in the golem. Then, the dao snaps his fingers and the armor of invulnerability appears on him. The players decide that the miniatruized version of Paultin is called "Smalltin."

The duchess, Brimskarda, grabs Evelyn and they get into an argument. She carries Evelyn into the kitchen, where there are some ogres and smoke mephits.

Duke Zalto brings Diath is into the room with the vonindod. Near the collapsed construct, Diath spots a massive sword (70 feet long) and a big heart made of gleaming stone. This room has massive double doors. Diath is sure that these doors lead outside.

While the Duke looks around the room for his hell hounds, Diath tries to pick the lock of the cage but fails. The Duke puts the maul down.

In the kitchen, Brimskarda tries to dump Evelyn into a giant stew. Evelyn falls in, and then flies back out with the aid of her magic boots.

Diath is free. He finds Strix and they talk about ways to get out of Ironslag. Strix wants to cast gaseous form on Diath.. but they are interrupted. Evelyn flies toward them, with Brimskarda close behind.

Evelyn sees the huge stone, the heart of the Vonindod, and decides to threaten to destroy it if the giants don't back off.

Diath shouts up to her and tells her to go ahead and shatter it. Anna describes a slow motion scene where Evelyn flips her hair (sending stew flying), spins and hacks into the heart. To her dismay, Lightfall strikes the stone, and Lightfall explodes. Evelyn lets out a blood-curdling scream.

Diath watches the Duke sifting through the wreckage. Diath sees Waffles the baby owlbear, about to be discovered by the fire giant. End of session.