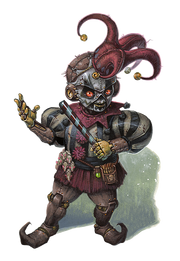 A small, humanoid construct that resembles an evil jester boy, this creature has many names: Pidlwick II, Murderbot, and Simon. The waffle crew first found him rolled up in a carpet at a vistani camp. They (eventually) decided to keep him. He can fire darts from his mouth, some of which have lethal poison on them. Almost immediately after befriending the waffle crew, Murderbot killed a vistani boy named Joseph, and the group had to flee the camp, leaving Murderbot behind.[1]

When the group escaped Barovia, Murderbot followed them. When they took shelter in a lodge during a blizzard, he climbed down the chimney and waved at Paultin. He remained with the group.[2]

Paultin used suggestion on Murderbot to befriend him. Murderbot used a sleep dart to take down an owlbear who was dragging Strix into the forest.[3]

Paultin begins calling him "Simon" and referring to him as his son. During a battle against hill giants, Simon shot a sleep dart into Strix when she wanted to cast fireball on a giant Paultin had cast suggestion on. After the battle, Diath was angry with Murderbot, as was Strix. [4]

During a battle against yakfolk, Simon was crushed by an earth elemental. Diath couldn't stop laughing about this. Paultin became enraged. The tension between the two lingered for a long time.[5] Evelyn brought Simon's remains to a toymaker in Citadel Adbar. The toymaker was paid 500 gp to repair Simon, but he created Evelyn's construct body from the remnants instead.[6]

When the group traveled to Barovia's distant past, they met young Simon. He was supposed to be a wedding "present" (but was actually part of a betrayal plot). The group took him with them, even though he tried to kill Tatyana almost immediately.[7] This incarnation of Simon spent 50 years alone with Strix and Waffles in the forest of Barovia before being reunited with the rest of the Wafflecrew.[8] It is unclear whether this version of Simon retains his memories prior to being squashed by the giant.

The Raven Queen gave Simon the ability to speak in exchange for the hand and the chalice of Ch'gakare. [9] With the ability to speak, it is revealed that he considers the Wafflecrew as his family, and begins rattling off terrible jokes. That same day, he dies in a battle with a balhannoth. [10]

Once the group returned to Port Nyanzaru, Omin Dran brought Simon back to life with a raise dead spell. [11]

When the heroes moved to Waterdeep, Simon secretly abducted a boy and kept him in a box for a few days. Apparently, Simon wanted to become a real boy. When the heroes found out, they freed the prisoner and brought him to his home. The boy decided to tell his parents he was having a sleepover, as he felt sorry for Evelyn. Simon then ran away, but was quickly found by Paultin. [12]