This is the Dice, Camera, Action puppet show. It was aired one week after episode 66.

Since it is Halloween and the group isn't playing this week, Chris Perkins decided to recap the entire show in sock puppet form. It has a sort of "Unabomber" feeling to it, as if Chris has been locked in that room for way too long. 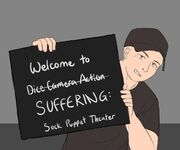 Chris does a great Evelyn voice, very hilarious. Her puppet has this glittery foil as hair, very amusing.

At first it looked like Chris was changing socks really fast, but it becomes clear that this show was taped and edited. You can see the top of Chris's head most of the time. Chris did prepare a lot of props for this, each of which is of varying quality.

He does a Dee impression. Puppet Evelyn maniacally hug Strix.

Puppet Strahd emerges from behind the couch. He has a red cape and sort of sings his own theme song. Then he starts making out with Paultin, and Paultin points out that that never happened.

There are a lot of retakes kept into the show. As things progress, it becomes apparent that Chris is running the puppets as if they really are the characters, and that they are acting out the scenes from the show. Evelyn can't remember her lines and curses up a storm.

"We met a bunch of wereravens at a winery." Chris starts waggling around a raven doll and goes "Ca caw, ca caw."

Paultin and Evelyn start making out. Chris points out that the Tome of Strahd was not helpful at all. 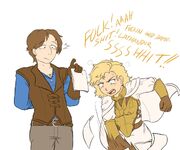 Chris says that "fan-fic Drizzt" showed up and helped the group kill a bunch of werewolves. He points out that there isn't a lot of story going on in this season so far.

We get to the part where Harshnag falls to his death. Chris represents this by throwing a sock.

Chris bursts out laughing when he has Strix growl at Evelyn.

When Paultin saved Evelyn, Chris explicitly says that the Raven Queen gave him the undead hand.

Chris spends quite a bit of time roasting his own ideas. He points out the absurdity of how destroying Paultin's shadow sent them back in time somehow.

Sir Godfrey is a skeleton action figure. He can't remember his lines. We get a few bonus clips, one involving Strix Blair Witch-style. End of show.

The following week, the group played through episode 67.